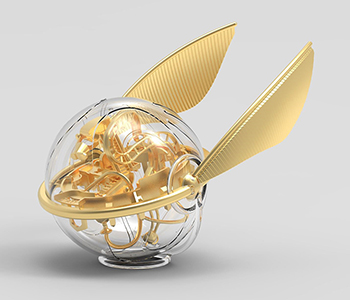 Perplexus is a complex, 3-dimensional labyrinth, traced by a ball bearing. It is a skill and action game that helps develop hand-eye coordination and spatial skills. There is only one rule: Do not fall off the track. Perplexus is easy to learn by picking it up and playing. Mastering it is the challenge.

McGinnis is a Sonoma County artist, artisan, inventor, and instructor. As a child, he was fascinated with labyrinth games and enjoyed creating his own designs. He began sketching his ideas for three-dimensional labyrinths in the 1970s and created prototypes for his own games beginning in high school. While studying sculpture at Santa Rosa Junior College, his instructor encouraged McGinnis to contact toy and game companies. He has been perfecting and creating new versions of his game ever since.

Since 2010, the Perplexus line has won more than 30 awards from various groups, including the prestigious TAGIEs and TOTYS, the two annual toy award events judged by industry experts, retailers, and consumers. The TAGIEs are associated with ChiTAG (Chicago Toy and Game Fair), rebranded as People of Play (POP). The TOTYS are affiliated with the Toy Fair New York. In 2013, McGinnis’s game design, Perplexus EPIC, won the Toy of The Year (TOTY) award.

For SRJC’s 100th anniversary, McGinnis and his students collaborated with SRJC’s Engineering Club to fabricate Veritas, a sculpture reflecting the search for truth in its labyrinthine path of interconnected elements. Veritas stands on a base covering the time capsule placed in SRJC’s Santa Rosa campus quad.

“I feel it is important to remain an instructor of sculpture and design,” said McGinnis. “There is an incredible opportunity to give to others the knowledge I've gained through my creative life. If it had not been for an art instructor more than 30 years ago, my entire body of work would never have occurred.”