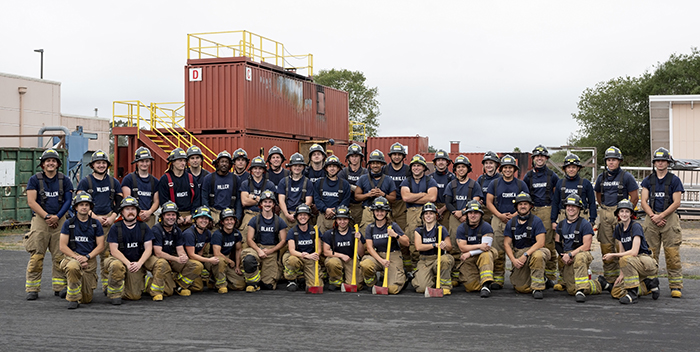 October 19, 2021, Santa Rosa, CA –This fall’s Santa Rosa Junior College (SRJC) Firefighter Academy is in its 100th class. With wildfires affecting the county more than ever, the Firefighter Academy is providing the skills and knowledge students need for a career in fire service, providing the community with proficient and compassionate first responders.

The Firefighter Academy is a one-semester course. It meets the State Board of Fire Service’s educational requirements for Firefighter I and Firefighter II certification combined with a separate Emergency Medical Technician (EMT) training. Upon completing a wildland component, students also earn a CALFIRE Basic Firefighter Certificate. Graduating students earn 13 certificates in all and are prepared to advance into their desired career path.

Fire Technology Director Ken Sebastiani said that the training has grown from a 54-hour program in the 1980s to include 585 hours today. “Fire Academy graduates fill an indispensable need for firefighters to protect people from the ravages of wildfires like the ones we have sustained over the last few years,” said Sebastiani. “The SRJC Fire Technology program looks forward to the next 100 academies and preparing the next generations of firefighters.”

Molly Anderson, class leader for the 100th academy, said that this program teaches students to become better public servants while adapting to the changing needs and demographics of the community.
“The fire service is known for being steeped in tradition,” she said. “As the next generation of firefighters, we have been tasked with shifting some parts of our tradition: creating a safer and healthier work environment and encouraging diversity in the firehouse. The 100th academy has seven talented, strong women. We have a long way to go to embrace diversity in it’s fullest spectrum; training women to join the fire service brings us one step closer towards diversity.”

Del “Tisch” Rebentisch is the assistant class leader and a volunteer with the Cazadero Fire Department.

“Once you’re in a firefighting role,” said Rebentisch, “you can show up on someone’s worst day with compassion and the ability to make them comfortable.”

Scooby Wright is a student in the Firefighter Academy’s 100th class. His interest in fire service began while he played for the Arizona Hot Shots, the Alliance of American Football team named after the Granite Mountain Hot Shots, wildland firefighters who gave their lives in the Yarnell Hill Fire of 2013.

“I realized what the job entailed,” he said. “Heros are people who serve the community and help those around them. That’s what life is really about.”