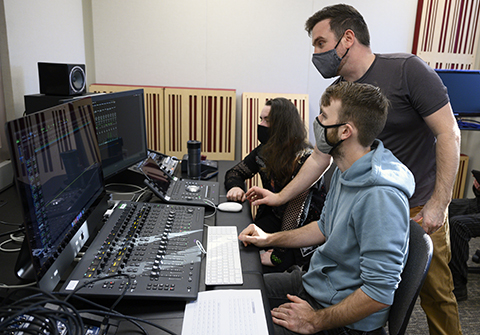 This program is aimed at students wanting to break into the music business. They learn modern techniques for recording and editing audio using industry-standard equipment and modern recording technology in the new recording studio on SRJC's Petaluma Campus, which was furnished and designed for professional music recording.

“A notable example of how we were able to assist the artist,” said Music Recording Instructor, Jake Stillman, “includes a Spotify growth campaign in which we were able to grow their listeners by 102% and their streams by 159% in just the three weeks following the release.”

Stillman has collaborated with Brian Antonson’s film class, which will complete the music video for “As We Go” in fall 2022.

The Digital Media: Audio certificate requires 24 units, which can be taken in three successive semesters, making a certificate achievable in 1.5 years. Professionals with this certificate have career options in the music, film, and audio industries, including music producer, recording engineer, live-sound engineer, podcasting producer, sound designer, and more.

Students in the program can earn both a certificate and an associate degree.

A music producer's average base salary in San Francisco is $60,000 a year. A sound engineer averages $85,000 annually.